In Denmark, Bikes Have a Seat on Some Trains

Posted on January 20, 2011 by dontblockthebikelane

A car on Copenhagen's railway system, specifically for bicyclists and other passengers with special needs. Photo by Copenhagenize.com

Taking your bike on public transit can be a huge hassle, or often, not an option at all. Specially designed accommodations for bicyclists are usually severely limited, and on certain bus, train and metro systems, bikes are only allowed on board during non-peak hours.

Denmark’s transit system continues to build its reputation for being bike friendly. Early last year, the Danish State Railways, offered free bike carrying on their trains that serve greater Copenhagen, in an effort to further endorse biking as a legitimate mode of transit. As the blog Copenhagenize.com wrote, “DSB hopes to make everyday journeys easier for Copenhageners and encourage more people to use their bicycle.”

The Danish transit service provider is going a step further by providing bicycle pumps in existing bike compartments. The pumps will be installed starting in the New Year and DSB will double the capacity of “flex compartments” for more bicycle capacity.

The announcement of the new measure for free bike travel on trains came along with a public demonstration that included creative marketing flyers and brochures. We think public art, outreach and good communication is important for sustainable transport, and Copenhagen does it well.  More… 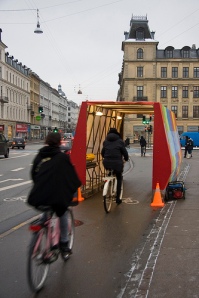 Danish State Railway organizes a cycling demonstration on one of the busiest streets in the city, following their announcement of free bike carrying on trains. Photo via Copenhagenize.com

This entry was posted in Public Transit and tagged Copenhagen, Copenhagenize.com, Denmark, public transit, The City Fix. Bookmark the permalink.