Posted on February 28, 2011 by dontblockthebikelane 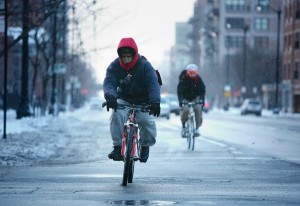 A new type of bike lane is being designed for Chicago to boost the confidence of cyclists that it’s safe to ride on streets without fear of being struck by vehicles.

The special lane is called a cycle track, and it’s unlike the regular marked bicycle lanes that run next to vehicle traffic lanes and are separated only by paint on pavement.

The Chicago Department of Transportation recently received a $3.2 million federal grant to build and test a cycle track. A section of Stony Island Avenue, between 69th and 77th streets, was selected for the experiment.