Posted on March 11, 2011 by dontblockthebikelane

By Kory Northrop
Univerity of Oregon
2011 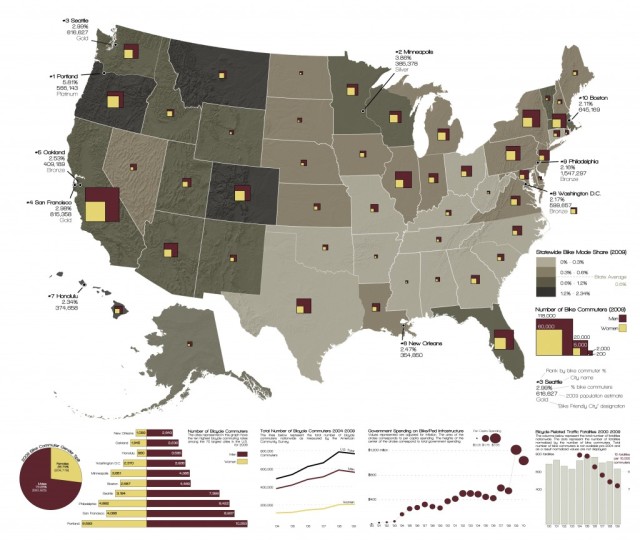 After multiple decades of auto-centric funding and policies, the American transportation system and built environment has become difficult to navigate by methods other than the automobile. This reality is highlighted by the fact that half of the trips in the United States could be traveled in 20 minutes or less via bicycle and a quarter of the trips could be walked in 20 minutes or less. However, the majority of these trips are made in automobiles.

Bicycle transportation has received significant attention in recent years due to its potential to increase mobility, alleviate traffic congestion, reduce negative environmental impacts, and combat public health issues. These problems will only worsen if left unchecked making them that much more difficult to overcome. Policymakers and citizens alike are interested in bicycle transportation and the potential that it has to bring positive changes throughout their communities.

Where does the United States stand now? How has the situation changed over the past few decades? The data show that bicycle commuting has increased more than 150% from 2004 to 2009, safety has improved, and government funding has also increased. While the United States has come a long way in improving bicycle infrastructure nationwide, there is still a lot of work to be done in order to make bicycling an attractive and viable alternative to driving.

1 Response to Bicycle Commuting Trends in the United States