Posted on May 10, 2011 by dontblockthebikelane 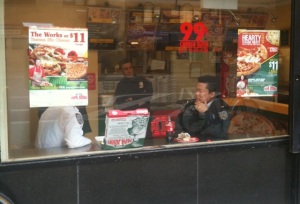 Responding to an emergency call for “better ingredients, better pizza,” an elite NYPD dinner unit swarmed a Papa John’s location on Second Avenue and 25th Street yesterday. Arriving just in time to prevent a tragic loss of calories, the officers secured the perimeter and quickly cordoned off a section of the restaurant, where they neutralized the suspect, who was found hiding in a small greasy cardboard box. While containing 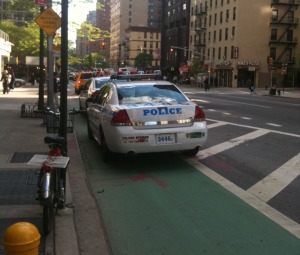 the crisis, which unfolded during the evening rush hour, two squad cars were left parked in a bike lane. Obviously, no one can quibble about that – officers are sometimes forced to violate minor traffic laws in the course of official police appetite business.

In an attempt to obtain more details about yesterday’s dramatic dinner raid, we emailed the NYPD press office, and asked if there are any departmental guidelines on blocking bike lanes. We wonder if it’s only permitted when responding to pizza emergencies, or are doughnut runs also a legitimate justification? Of course, the NYPD has previously blocked bike lanes to help officers ticket cyclists for not using the bike lanes, but it’s unclear if yesterday’s Papa John’s incident was part of any additional bike lane enforcement. At press time, the NYPD has declined to comment.