Posted on September 25, 2011 by dontblockthebikelane 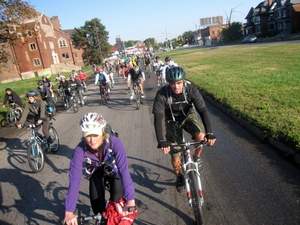 About 4,300 people took part in the tour, riding either a challenging 62 miles through the city, or a more leisurely 20-something miles.

What’s that you saw on Saturday morning? Thousands of bicycles on the streets of Detroit?

About 4,300 people took part in the 10th annual Tour de Troit, riding either a challenging 62 miles through the city, or a more leisurely 20-something miles from Roosevelt Park near the Michigan Central Station off Michigan Avenue toward New Center and parts of east Detroit and Belle Isle before looping back to the park through downtown.

“It started to promote biking, but it’s an opportunity to see how ridable Detroit is on a bike,” said Vittoria Katanski of the Southwest Detroit Business Association, which sponsored the event.

In its 10 years, the ride has raised more than $100,000 from entry fees for the Southwest Detroit Greenlink — a series of bike lanes and paths that aim to connect the various neighborhoods and districts of southwest Detroit. The money raised will be used to improve existing paths and build new ones.