Drivers, Cyclists Square Off on Sharing the Road

Posted on May 18, 2012 by dontblockthebikelane 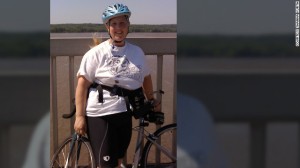 Shanna Kurth began biking to work three years ago to improve her health. Several times a month, she loaded her bike onto her car, drove most of the way and biked the last three miles to her office.

Bit by bit, she shortened her time in the car and extended the bike ride. Now, the 50-year-old Illinois woman says she bikes all the way to work several times a month from her home in Metamora to Peoria: 25 miles each way, amounting to about two hours of travel time.

It’s no easy feat, and not something most Americans are willing or able to do, especially in suburban and rural communities, where bike paths are scant and cars are the only way to get around. The rate of workers commuting by bicycle doubled between 2001 and 2009, according to National Household Travel Survey data. But that still amounted to less than 1% of Americans reporting in 2009 that they used bicycles as their primary mode of transportation to work, according to the Census Bureau’s American Community Survey.

In honor of National Bike Month and Bike to Work Week, CNN asked its Facebook fans what it would take to get them to bike to work more often. A shorter commute and more bike lanes were by far the most common responses.